The creation of a computer lab and a library in the heart of the Andes.

Almayuda, which was already aware of the cause of the Q’eros, committed itself, alongside Willka Yachay, to creating a library and equipping it with computers connected to the internet. This is a major step towards opening up a people regarded as the last of the Incas.

This story begins in Aix-en-Provence, in the premises of Résidence 43.5, an artist-in-residence programme supported by the Almayuda Foundation. 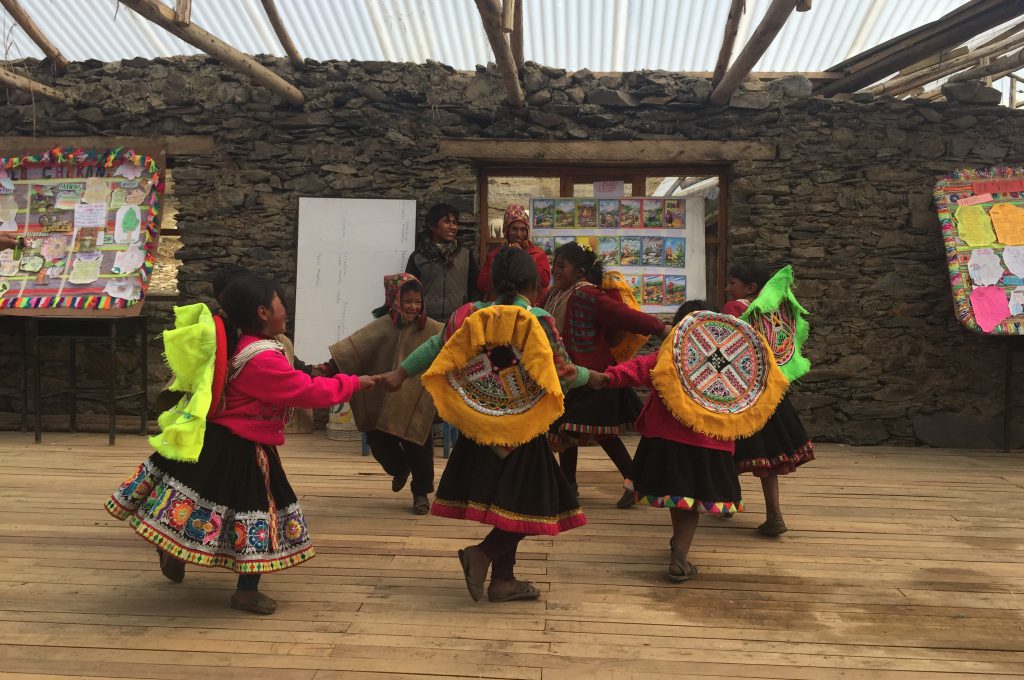 John Cohen, a famous American photographer, as well as a musician, filmmaker and member of the Beat Generation, spent some time at Résidence 43.5 in 2011. On this occasion, Michèle Cohen, the director of Résidence 43.5, organised an exhibition in Paris so that Cohen could present his testimony in black and white of the time he rubbed shoulders with Bob Dylan on the music scene in the Village in New York.

Almayuda was a partner in this exhibition and at that time discovered Cohen’s commitment to the Q’eros, the last Incas. Since 1957, Cohen has been raising awareness of this indigenous community in the Altiplano in Peru: their culture and their traditions, but also the obstacles they have to overcome simply to survive. Interested in their struggle, the Almayuda Foundation decided to meet the Q’eros and to offer them a number of lamas, an essential pack animal also used for its wool and meat.

Only by knowing their history and their rights will young people be able to build their lives and avoid exploitation.

During their time with the Q’eros, the Almayuda representatives met a young American, Hannah Rae. Like Cohen before her, she had come to the high plains in the Andes to complete her end-of-course period of practical experience with the Q’eros. Impressed by their energy and sincerity, she stayed and founded Willka Yachay, a legally-constituted Peruvian association that works to develop teaching and education in Q’eros villages.

The association’s starting point is that only by knowing their history and their rights will young people be able to build their lives and avoid exploitation.

Willka Yachay sets up schools, hires and supports teachers, supplies them with material and food, offers them the opportunity for pedagogical experiences and trips, etc. The main aspects around which the association’s initiatives revolve are schools, a weaving co-operative, alternative energy, cultural preservation, particularly of traditional music, and food security.

Impressed by Rae’s commitment and the effectiveness of her organisation, Almayuda decided to support Willka Yachay by setting up a library equipped with computers connected to the internet, an amenity that complements and strengthens the network of schools set up by the association across the territory of the Q’eros people. 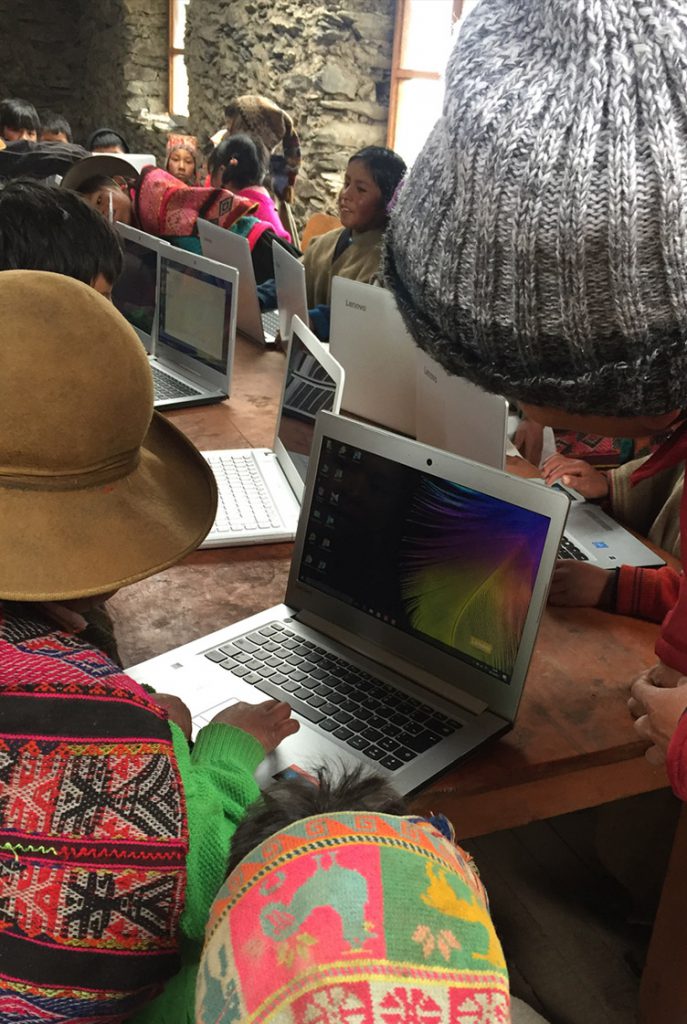 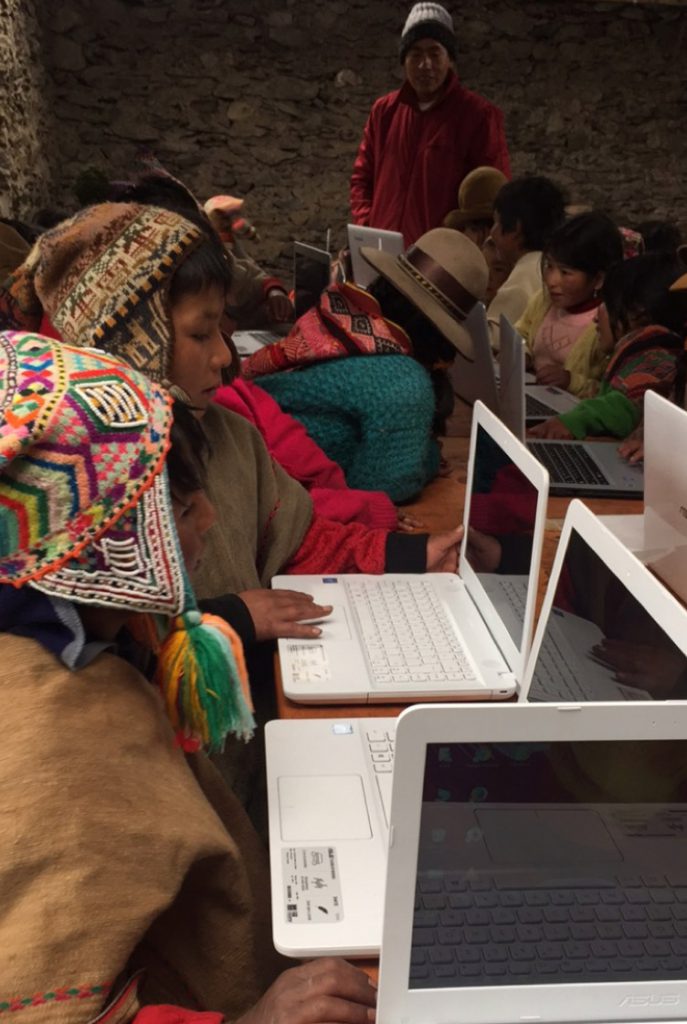 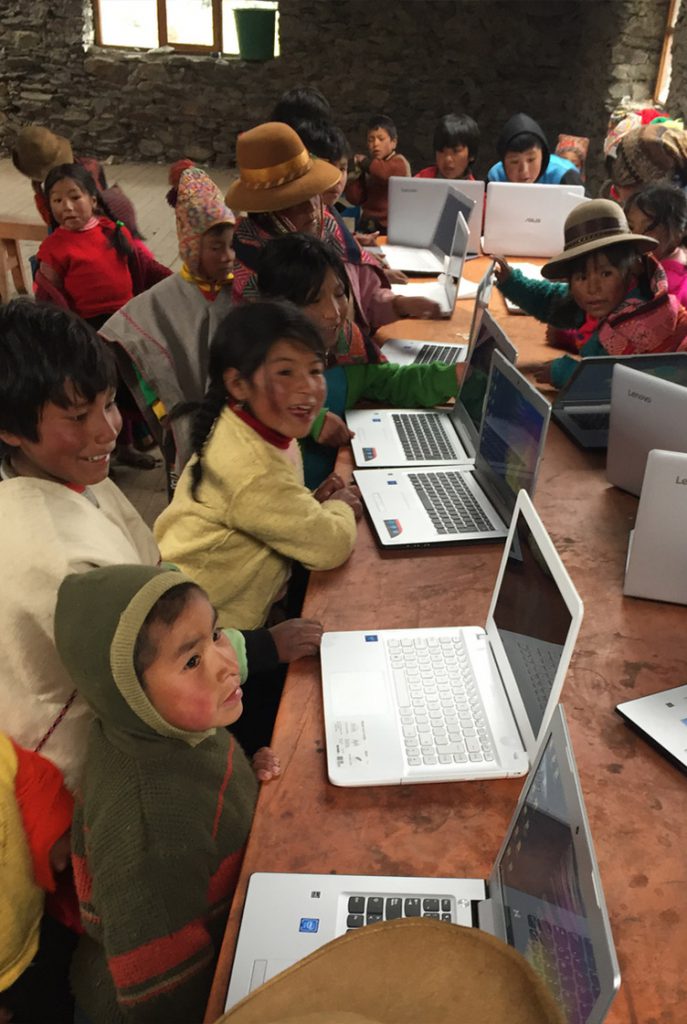 The library and its computer lab opened in 2017 in the village of Qochamoqo. A server, some 20 computers and printers enable 200 small girls and boys, as well as their families and teachers, to learn to work on screen and to look out at the wider world. To achieve this, they are helped by trainers who give them lessons. 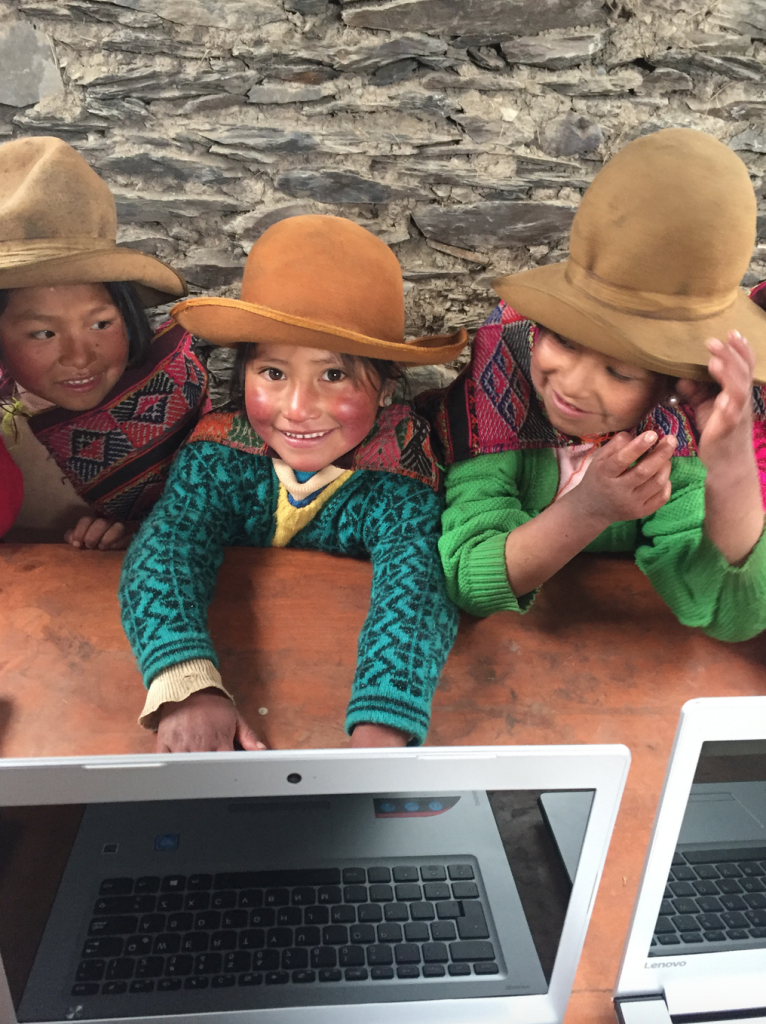 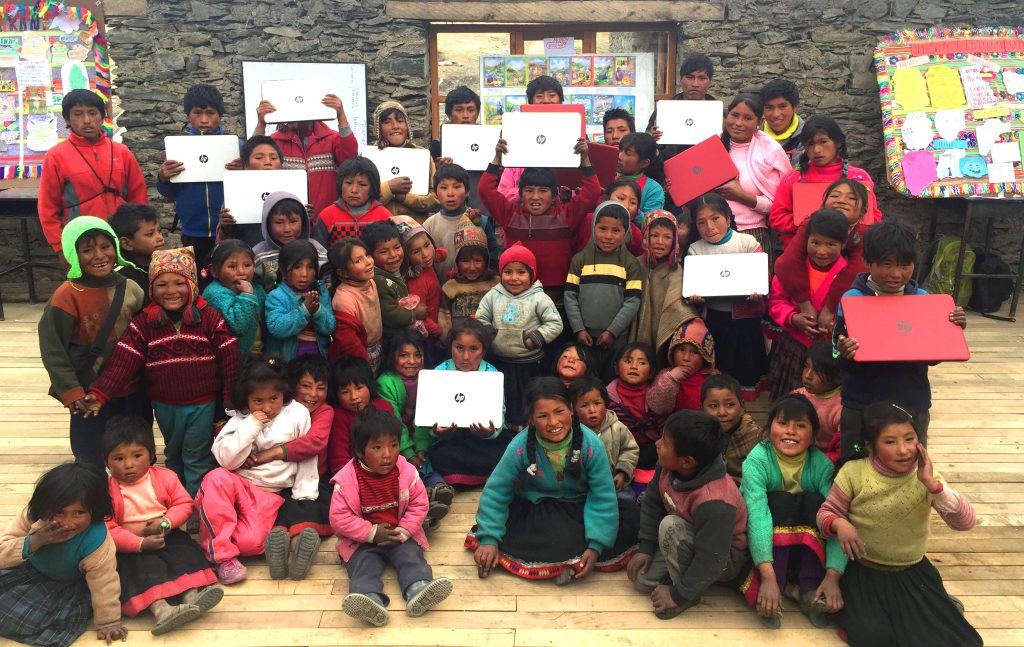 Thanks to the many books in the library, the children are developing their reading skills and the habit of reading. They are, therefore, learning to master the principal means for accessing knowledge. 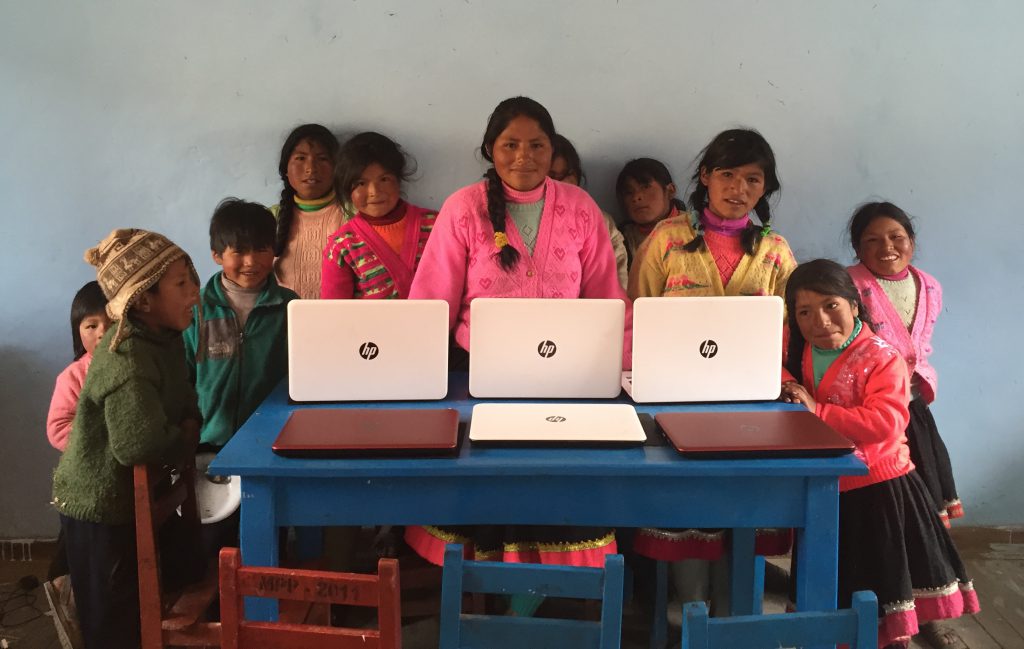 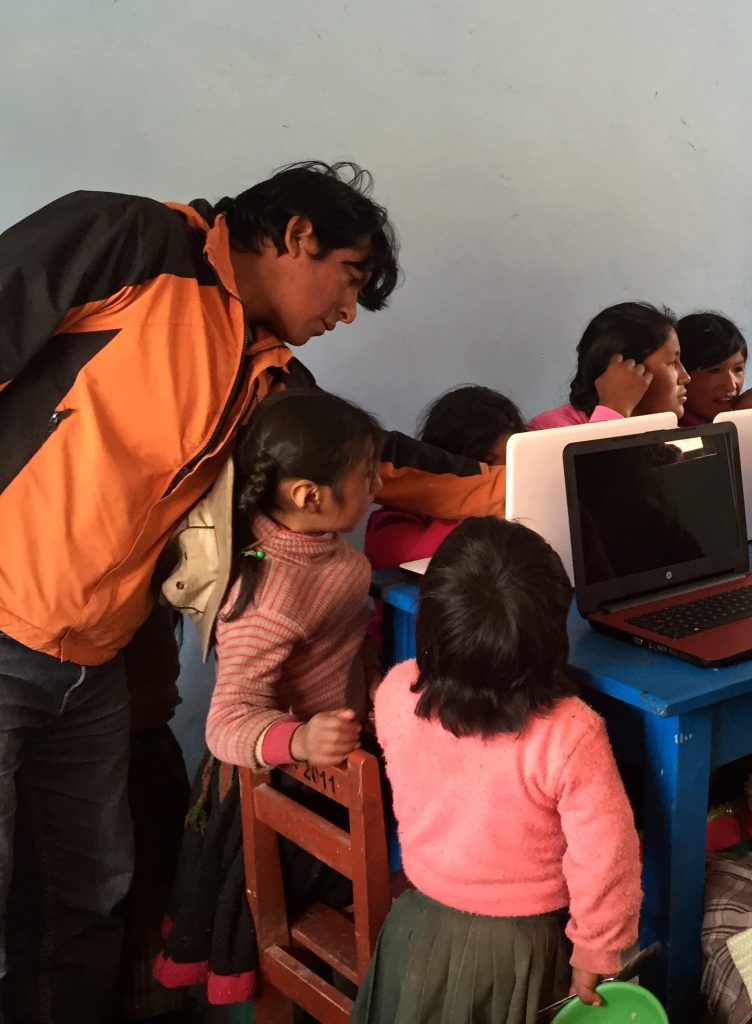 This programme, run with the support of the Almayuda Foundation, represents a stage that may be decisive in Willka Yachay’s overall project. With literature and the internet, it is indeed a great step towards opening up the Q’eros.

The Q’eros: the last Incas

The Q’eros are the last Inca community in Peru and have been described as “national, living cultural heritage” by the Peruvian minister of culture.

Considered the guardians of the wisdom of the Andes, they live in harmony with nature, making offerings to Pacha Mama, Mother Earth, and to the Apus, the mountain spirits, in exchange for the wellbeing of their animals and their community and for good harvests.

Their 14 villages, home to more than 2,000 people, are situated at more than 4,000 metres in altitude in the Cordillera Vilcanota, the highest chain of mountains in the south-east of Peru.

The Q’eros breed lamas and alpacas at high altitudes. They descend to lower altitudes to care for their sheep and grow potatoes, and lower still, just above the ‘jungle’, to harvest their corn and vegetables, and to cut the bamboo and wood they need for their buildings and looms.