Published by Glénat, in partnership with Éditions du Centre Pompidou, on the occasion of the 40th anniversary of the opening of the Pompidou Centre, Le Syndrome de Stendhal is a 120-page-long comic book with artwork by Sagar and a script by Aurélie Herrou.

Supported by the Almayuda Foundation, enabling the project to come to fruition, Le Syndrome de Stendhal was applauded by critics on its publication in November 2017.

“I had reached the point of emotion where the heavenly sensations of the fine arts meet passionate feeling. […] As I emerged from the porch of Santa Croce, I was seized with a fierce palpitation of the heart; the wellspring of life was dried up within me, and I walked in constant fear of falling to the ground.” Thus speaks Stendhal in 1817 about the moment he left this basilica in Florence. The abundant wealth of Florentine art and the emotion that emanates from it left him so disconcerted that at the end of the 20th century, an Italian psychiatrist gave the name Stendhal Syndrome to the overpowering sense of wonderment caused by prolonged exposure to a vast array of works of art. 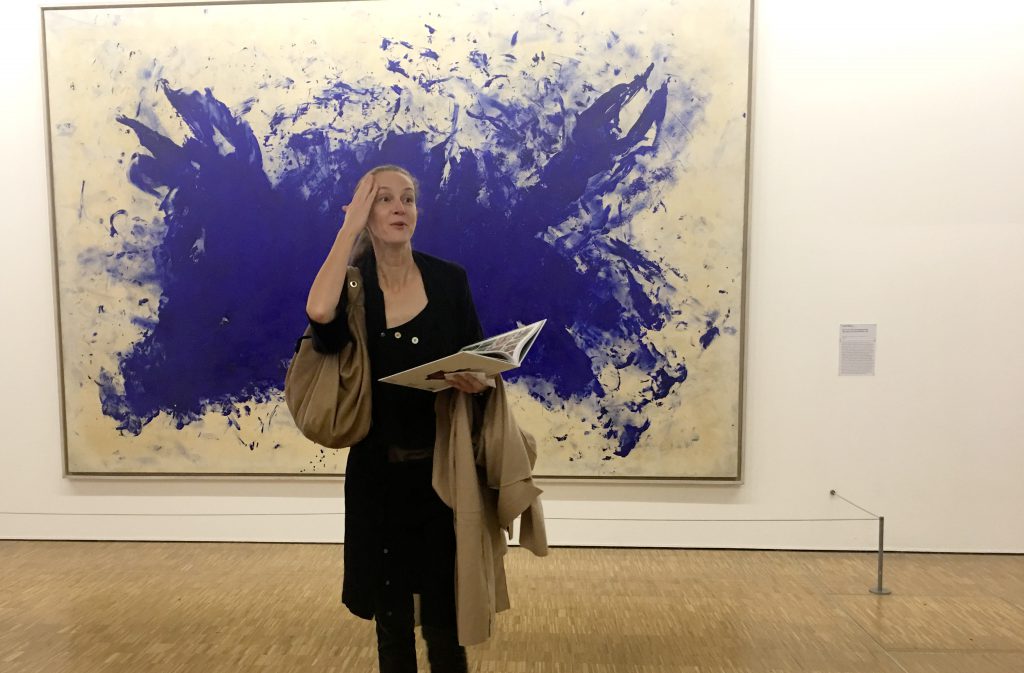 However, while she may not have given up her quest to make films, it is in comic form that she gives life in 2017 to the malady suffered by the author of The Charterhouse of Parma. In this venture, she was able to draw whenever she needed to on the knowledge of Véronique Michel, the art historian linked to the Almayuda Foundation.

He unwraps a Christo!

Never underestimate the power of art!

« Never underestimate the power of art!» could be the subtitle of this album, which sees Frédéric Delachaise, the penniless heir of an aristocratic family, forced to earn a living as a museum guard at the Pompidou Centre. Faced with a world he does not understand, upbraided by his narrow-minded boss, this character straight out of a Tati film dreams in the cafeteria, nods off while on duty and unwraps a Christo, believing it to be a piece of furniture that has been delivered. 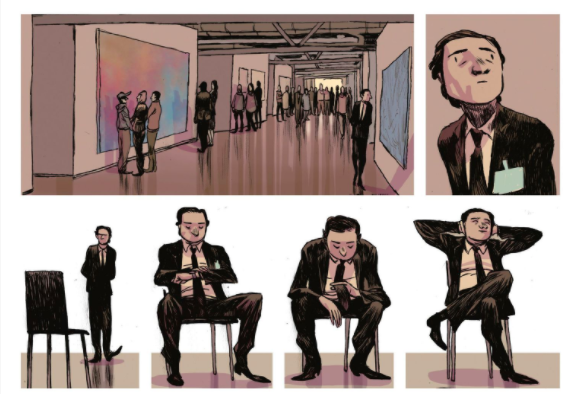 Extract from panel 41 of Le Syndrome de Stendhal by Aurélie Herrou and Sagar, published by Glénat. The character of Fred, employed as a security guard at the Beaubourg, wanders around its rooms before being seized by this strange psychosomatic illness.

His life outside the museum is hardly thrilling: the family estate is sold off by the notary; and his fiancée, an unloving opportunist, stays with him only to acquire the title of duchess. Fortunately, there is dance, at which he excels and which will soon enable him to express the boundless emotion he feels in response to artworks.

Because a strange phenomenon is about to occur. Initially indifferent, then curious and finally passionate about contemporary art, Fred establishes a relationship with the works, talks to them and goes so far as to physically enter them through ‘performances’. He even becomes a noted and notable expert in an art he once despised because his neurosis makes him become part of the work and because his ultra-sensitivity transports him into a parallel world. Stendhal syndrome leads him to the brink of madness and claims yet another victim! 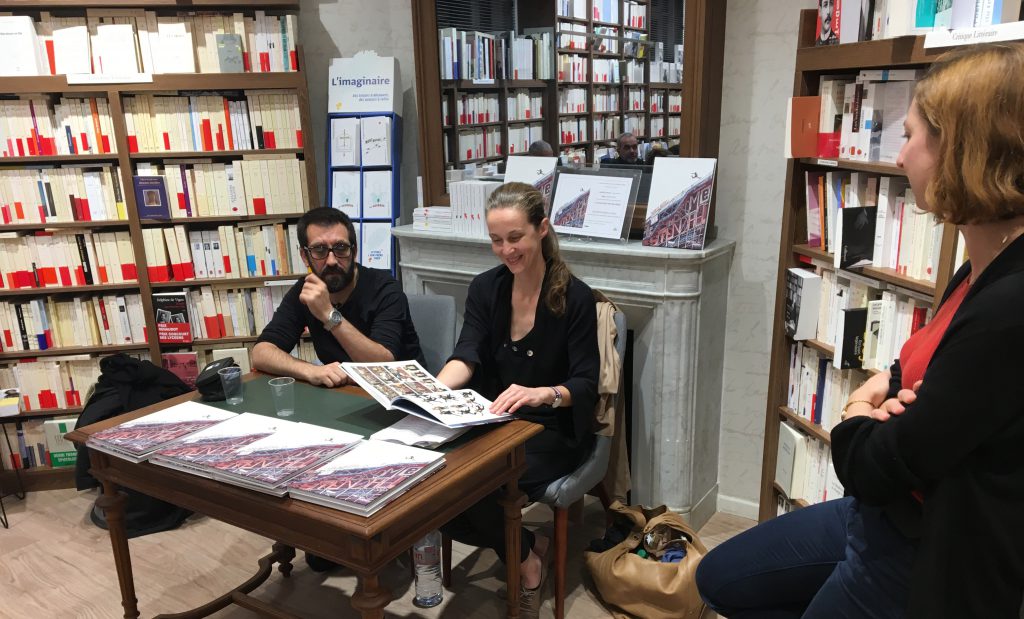 Book signing in the Gallimard bookshop 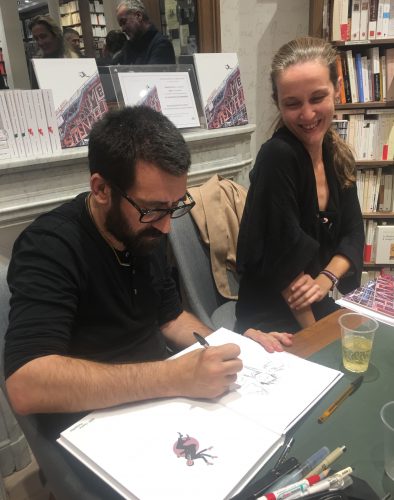 But there are many other enigmas in this work, such as the mysterious woman whose slender figure appears from time to time, like an apparition of Aurélie Herrou in her own script…

Special mention must be made of the quality of the artwork by Sagar Fornies, also known as Sagar: his absolute mastery of movement (the dancing!), his outstanding use of colours (the browns, blues and reds!), his rendering of emotions (the sense of isolation and hope). A former student of fine art in Barcelona, a lover of music and architecture, Sagar was nominated in 2016 for the best first comic album for Los vagabundos de la Chatarra and has everything it takes to become one of the greats.

Le Syndrome de Stendhal was given a warm welcome by comic critics and this will undoubtedly aid him in his career.

What the critics say

« Drawing on the burlesque of Jacques Tati and Claude Melki (the actor with his head in the clouds in The Acrobat), the scriptwriter Aurélie Herrou plays with the reader over the course of the trials and tribulations suffered by her character, an incongruous poet in a codified world, while Sagar, the cartoonist and an expert at movement, multiplies him in the panels. When the ninth art pays tribute to the other eight. » L’Express

« This album could have been entitled Monsieur Hulot Goes to the Museum. In response to contemporary pictures, Frédéric Delachaise shows himself to be equally behind the times and just as sweetly outmoded as the famous character of Jacques Tati when confronted by galloping modernity […] humour, poetry and a bleak lucidity [make] this album a rare object. As well as (thanks to the cartoonist Sagar) a small work of art. » L’Est Républicain. 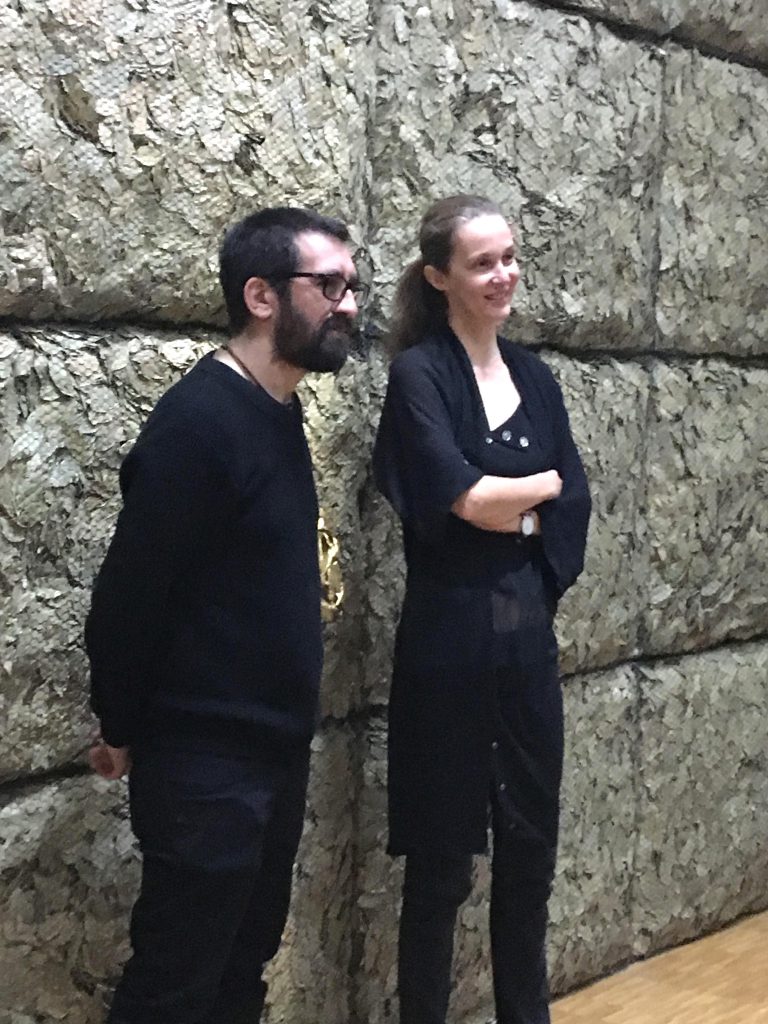 « This comic book wishes the Pompidou Centre a very happy birthday. The authors deliver a sublime and philosophical vision of what art can do for each of us if we are willing to embrace it. » culturebd.com

«In this work, Aurélie Herrou explores the distress of a man who escapes into dreams as he loses all his bearings. Sagar’s artwork shows itself to be equally convincing […] A book to be read in a single sitting. » culturevsnews.com

« The fact is that her intimist and surreal narrative, beautifully put into images by the supple line of Sagar, fills us with a fierce desire to go back into a museum and to allow ourselves to be won over by the works on display there. » sdimag.fr