Just as plants turn towards the light, so refugees from Africa and the Mediterranean basin look towards Europe in the hope of a better life…

The Almayuda Foundation supports new “Expeditions to the End of the World”, run by L’appartement 22 and its founder, Abdellah Karroum. “Help” is a Mediterranean-wide project that stages ephemeral artistic performances to help the cause of refugees. More than providing spaces for events, this artistic gesture invites us to reflect on the principles that underpin humanity. 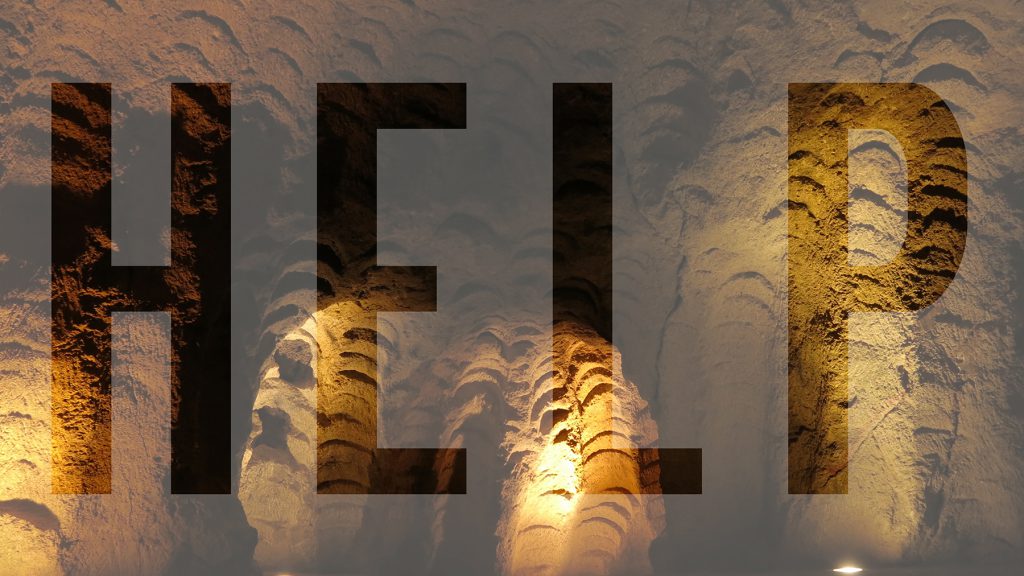 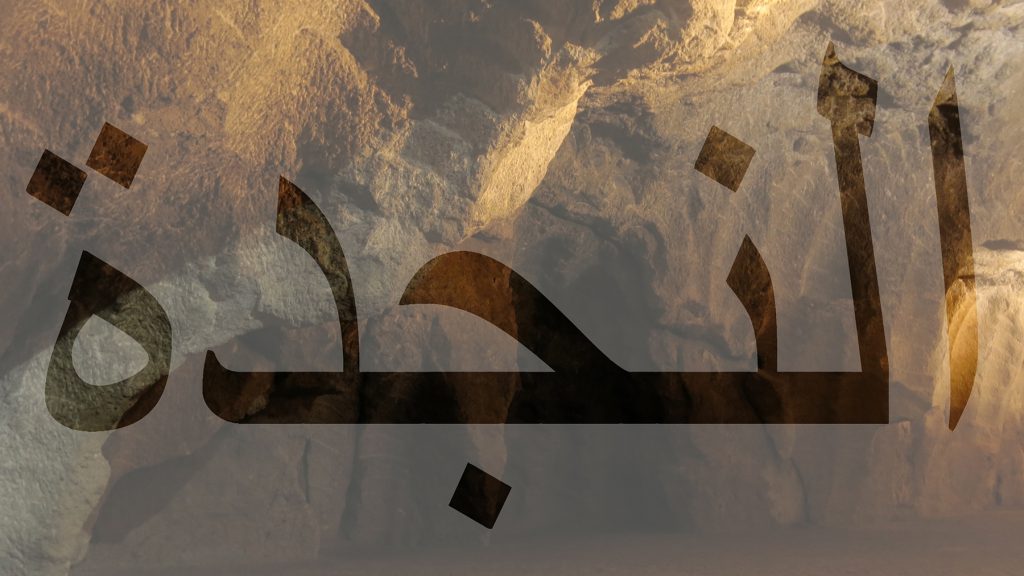 Increasing numbers of people are crossing the Mediterranean in the hope of a better life. This wave of migrants is rocking our societies and organisations. It questions not just our ways of life but each of us as individuals: are we doing enough about it? What can we do and how should we do it?

L’appartement 22 and its founder are responding to these questions by organising new “Expeditions to the End of the World”, embodiments of the nomadism of ideas advocated by Abdellah Karroum. In “territories far from the official contexts of contemporary art”, the artist produces works in close connection with the environment in which he is immersed.

Phototropism is the tendency of certain living creatures, plants, butterflies and plankton, to orient themselves in relation to the light, turning either in its direction or away. 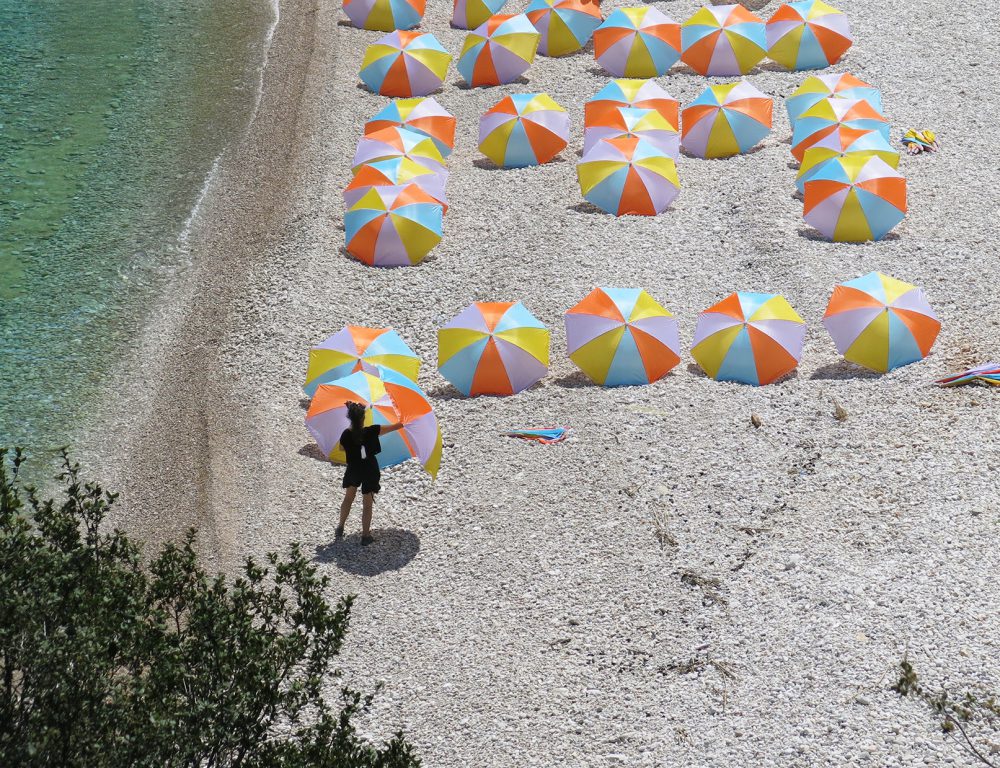 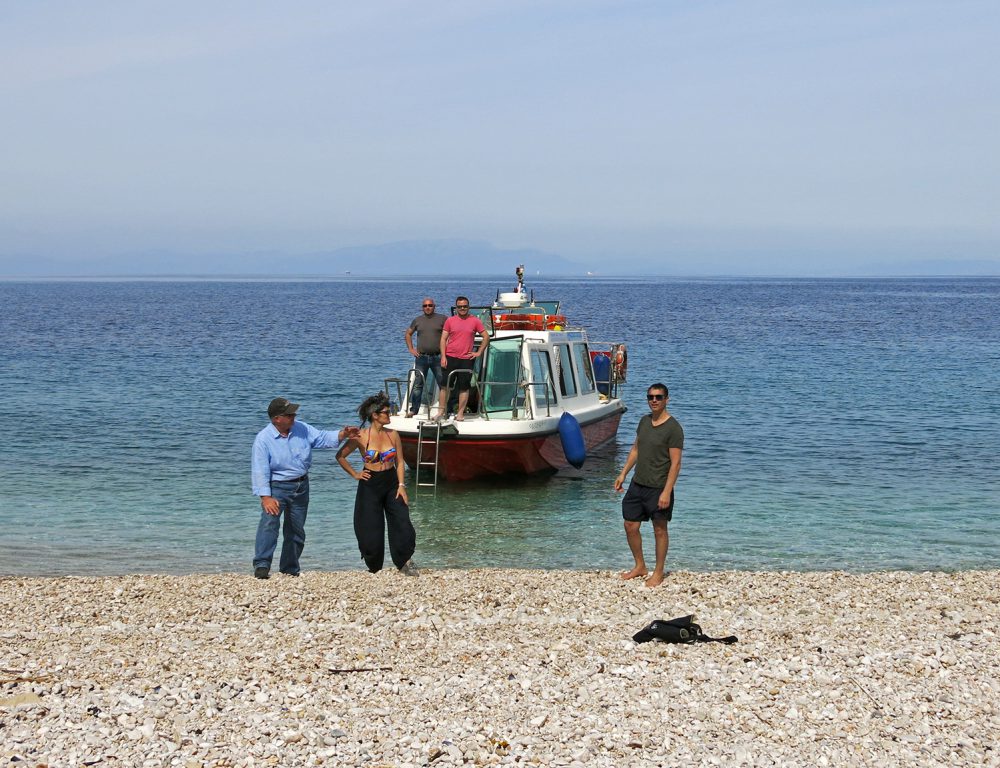 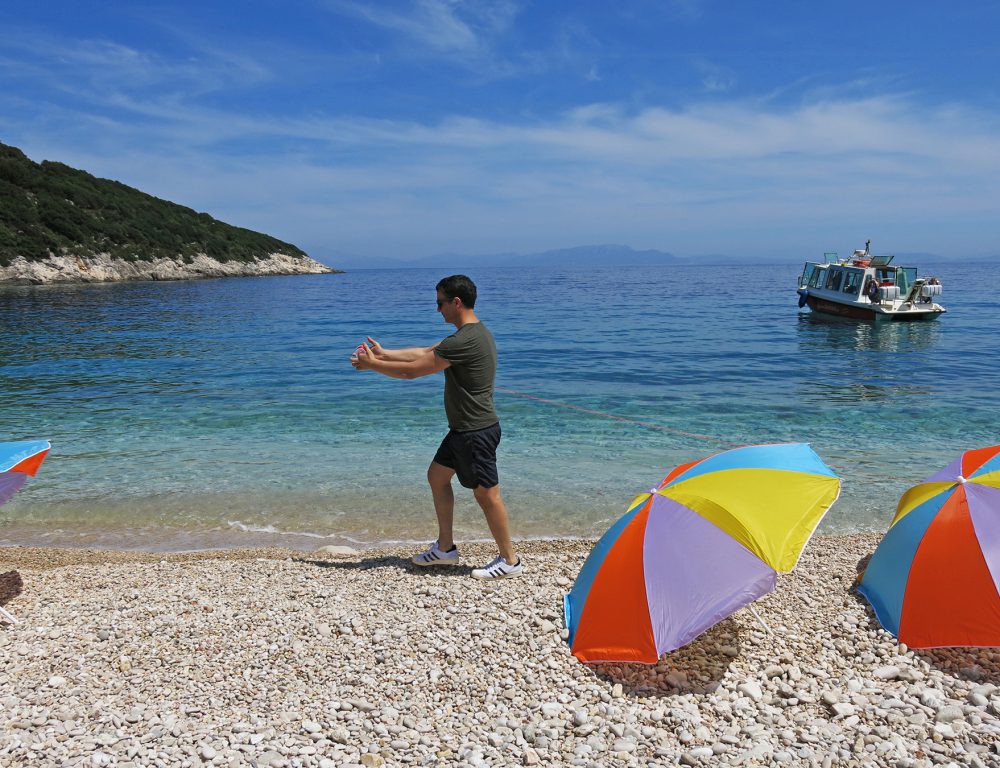 This primary phototropism is akin to that of the men and women who turn their eyes towards Europe, be they economic, climate or political refugees. To reach this source of light – real or illusory – they embark on perilous voyages across the Central Mediterranean or the Aegean Sea.

Help, an ephemeral performance inspired by the quest of these ‘Phototropics’, is the work of Georgia Kotretsos, a Greek researcher, critic and visual artist. Supported by Abdellah Karroum, she has designed an arrangement consisting of parasols standing in the sand of the island of Ithaca in the Ionian Sea. Viewed from the sky, these colourful parasols spell out the word ‘Help!’ in English and in Arabic. 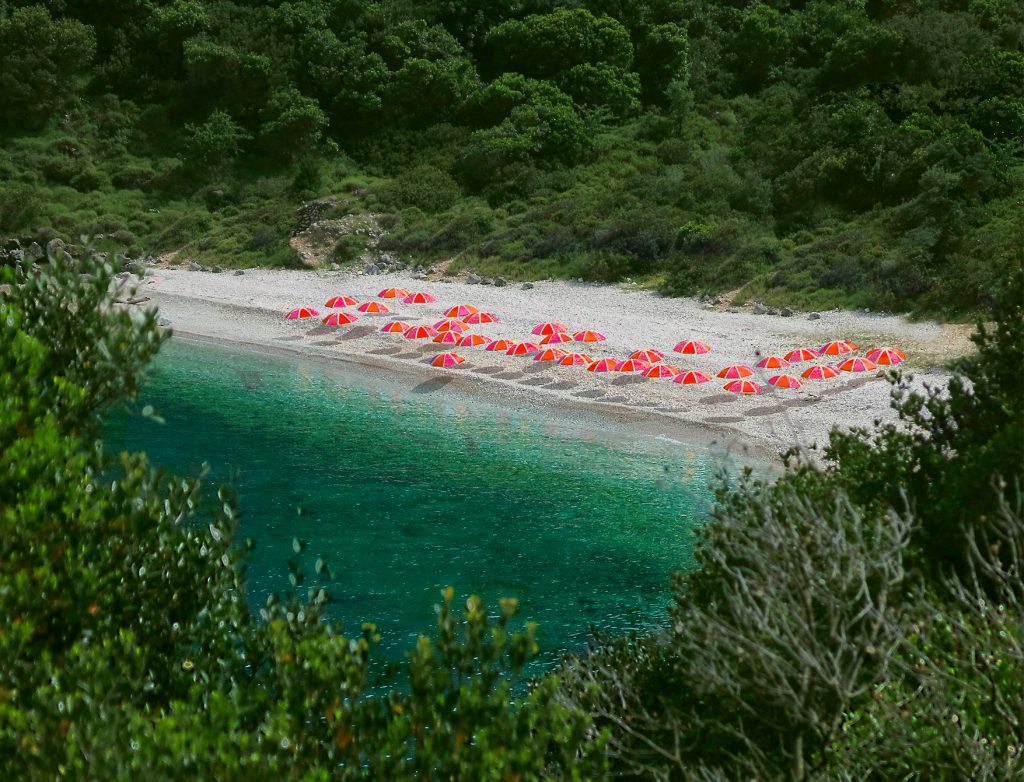 This deeply political experiment encompasses just about everything that can be said about the phenomenon of migration.

The sun embodies rich countries for those who come from poor countries. The cry for help, written on the shoreline, is a response to the distress calls of migrants, crushed by storms, misery and tyranny, while the parasols, symbols of mass tourism, illustrate the indifference of our societies to their plight.

The land of Ulysses, the eternal traveller constantly driven back from the shores of his island, was chosen for a reason. 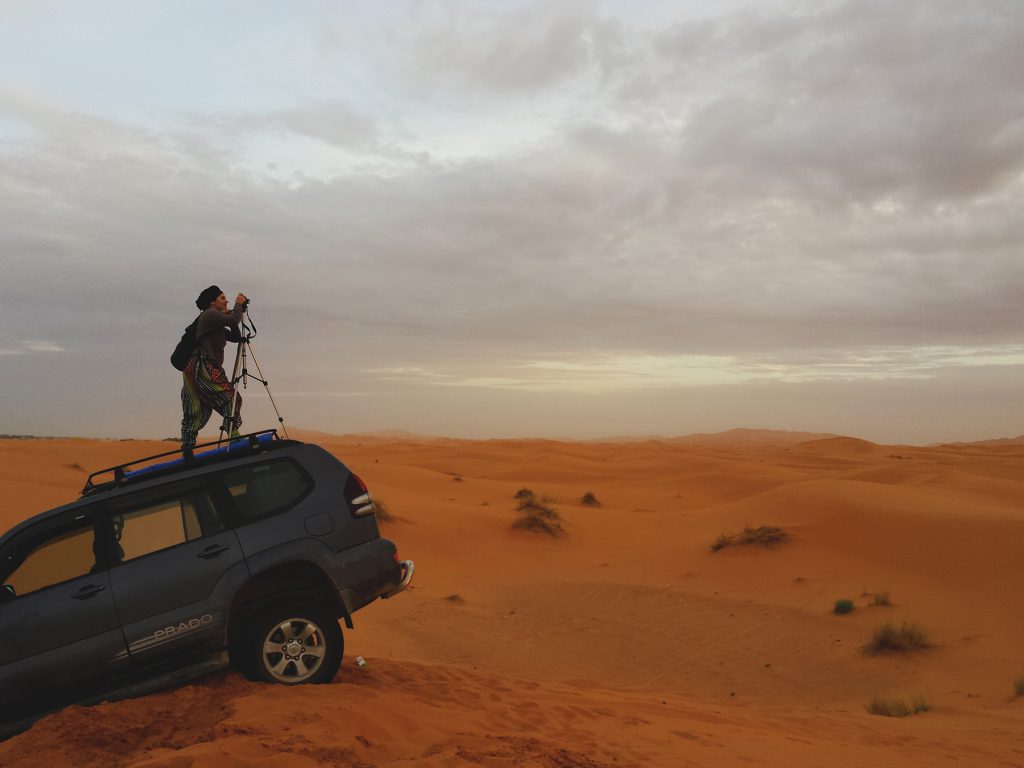 The choice of the dunes of Merzouga in Morocco, close to the Algerian border, was also carefully made, as numerous migrants from Sub-Saharan Africa set off along the desert routes, their eyes turned towards the north and Europe.

Here it is green and blue hsiras, traditional mats, purchased in a local market, that spell out the word ‘Help’ in English and Arabic. Set in this remarkable environment, this land artwork in raw colours vibrates with the force of urgency. 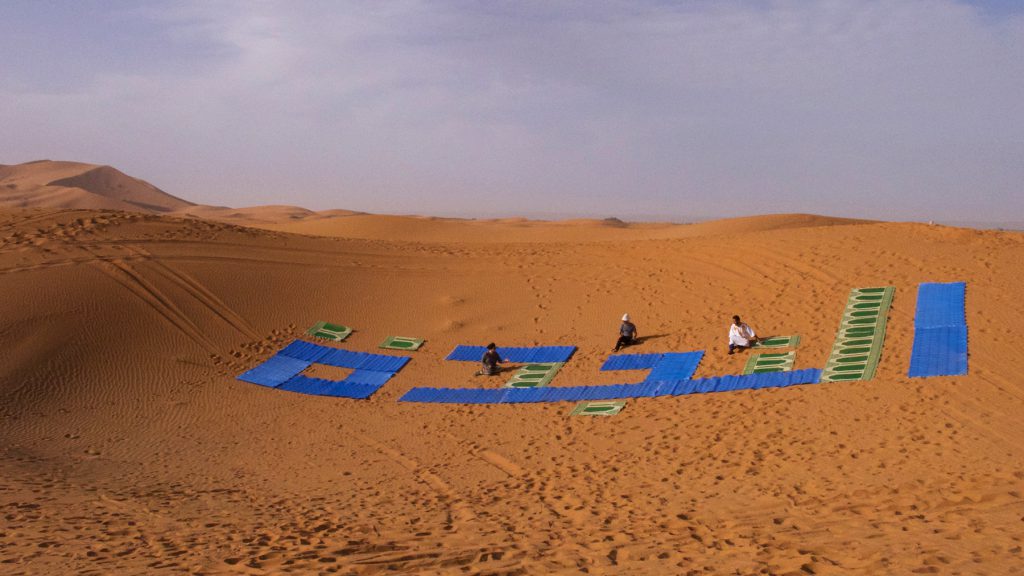 The Moroccan expedition was extended in February and March 2018 by Expedition #18, a performance in the Caves of Hercules on the Atlantic coast, a few kilometres from Tangiers. These natural caves, cut out by the waves, are situated at the entrance to the Strait of Gibraltar, the legendary crossing that has cost the lives of so many migrants! 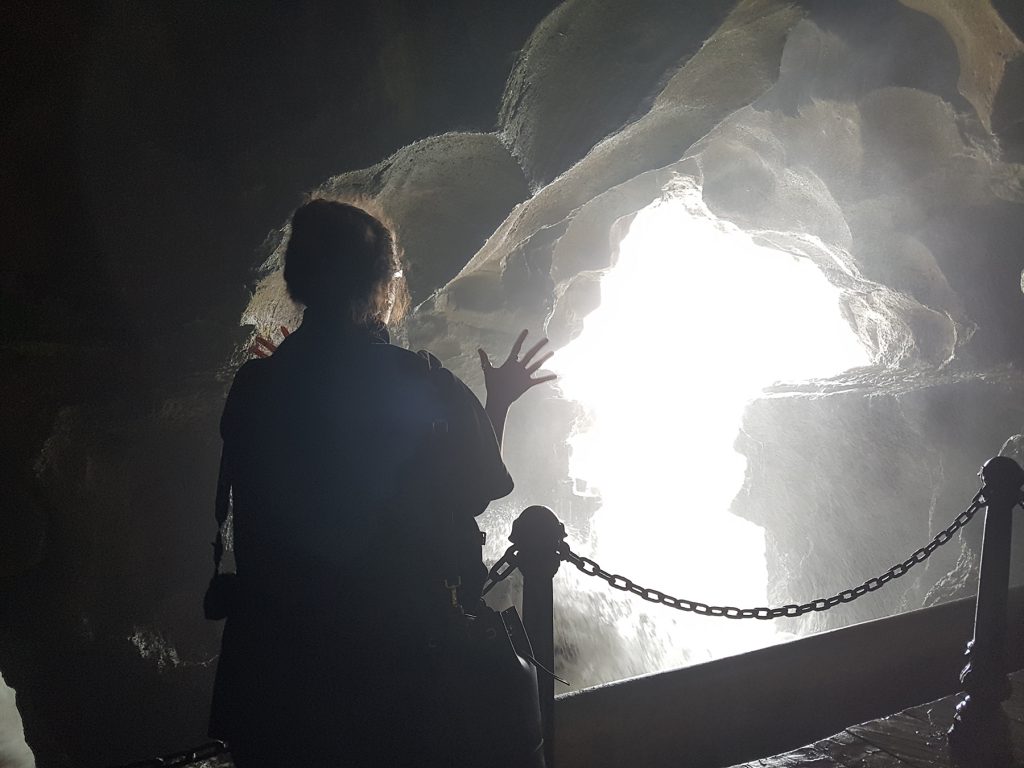 Following Greece and Morocco, the “Help” project should inspire other expeditions. The aim is to spread this self-same cry around all the countries in the Mediterranean basin, in Africa, Europe and the Middle East. It will be the subject of an exhibition, a video and a book published by Éditions Hors’champs.

Born in 1978 in Thessalonica (Greece), Georgia Kotretsos is a Greek visual artist based in Athens. She was brought up in South Africa and rediscovered the land of her birth in 2006. Until 2010, she divided her time between Greece and the United States. She holds a master’s degree awarded by the Art Institute of Chicago and co-founded the Boots Contemporary Art Space in St. Louis (Missouri). Kotretsos has had five solo exhibitions and has shown work in over 60 exhibitions in Greece, South Africa and the United States. She is linked to Abdellah Karroum’s Generation 00 and L’appartement 22, where she has been an artist in residence.

The curator of the “Help” project, Abdellah Karroum was born in Morocco in 1970. He holds a PhD, awarded by Bordeaux-Montaigne University, and is an art critic, curator and artistic director. Since 2013, he has directed the Mathaf: Arab Museum of Modern Art in Doha (Qatar) and is also the founder of L’appartement 22 in Rabat (Morocco). To find out more about Karroum’s work and career, from the Rif to the Venice Biennale, from La Triennale in Paris to the 2012 Biennale Benin, read two articles about him on this site: “From L’appartement 2 to the Rif Résidence and Back” and “From Working for Change to Before Our Eyes” as well as “Inventing the World in Images” and “Maroc 1975”