Sigalit Landau at the MACBA

Retrospective of the installations and videos by one of Israel’s leading contemporary artists.

The work of Sigalit Landau was shown at the MACBA (Barcelona Museum of Contemporary Art) between 21 November 2014 and 15 February 2015 in an exhibition entitled Phoenician Sand Dance, sponsored by the ALMAYUDA FOUNDATION, which provided financing that made it possible for a book to be published featuring reproductions and analysis of the artist’s work.

Sigalit Landau embarked on her artistic career in the mid-1990s in the climate of the transition from the 20th to the 21st century. Her pieces consist mainly of moving sculptures which, through the use of video, enable the artist to interact with the major political and historical themes of her time.

The mark of a profound poetry that lies between realism and symbolism, strength and fragility, innocence and aggression, history and the future.

The exhibition at the MACBA showed 13 of Landau’s works in which she addresses issues such as globalisation, identity, dependency, threats, conflict, play and emancipation.

Phoenician Sand Dance, the exhibition title, is an allusion to the almost constant presence of sand, the beach and the sea in Landau’s universe. She likes to make living bodies evolve on sand, to make them dance and enter into a relationship with the objects around them, leaving the mark of a profound poetry that lies between realism and symbolism, strength and fragility, innocence and aggression, history and the future.

A number of her works displayed in Barcelona made a particularly strong impression on visitors.

Three Men Hula shows three men hula hooping in the same hoop and reflects on the way an attempt to achieve co-operation and mutual aid develops into an absurd spectacle. This work anticipated another, Barbed Hula, in which we see Landau spinning a hoop made of barbed wire around her body, thereby expressing the fine line that separates play from torture. 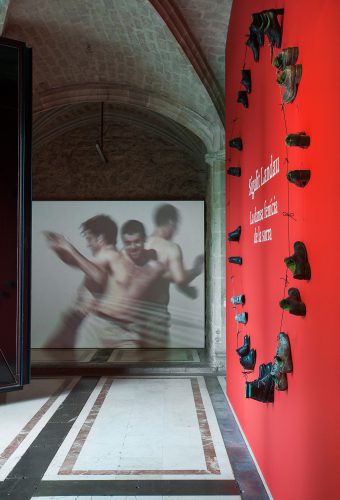 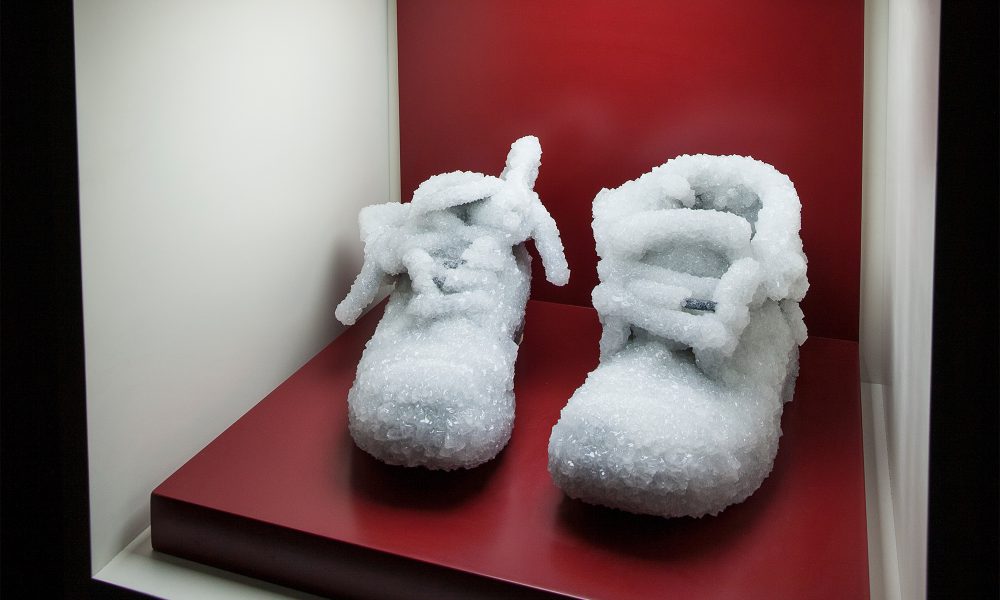 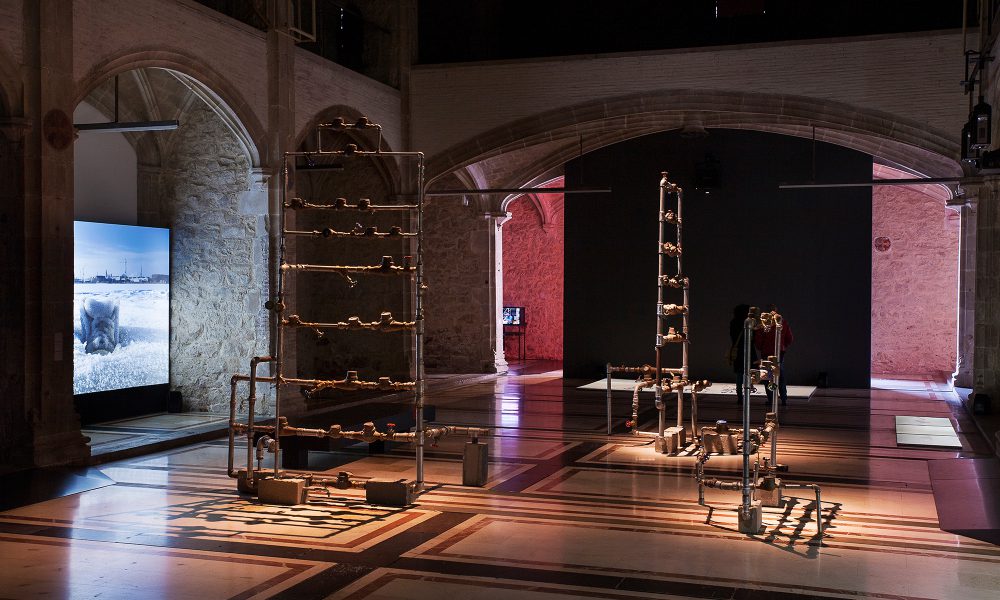 In Salted Lake, a pair of boots covered in salt crystals is placed on a frozen lake in the middle of a snowy scene. On the horizon, we see a motionless and silent industrial landscape. The cracking of the ice gets gradually louder as the salt on the boots melts it, until finally it gives way and the boots sink into the water. This work, which represents the modern historical conscience of the Jewish people, was shown alongside another, Worcester, in which abandoned shoes, also covered in salt, call to mind the Shoah, the Holocaust.

The presence of salt, like that of sand, is evidence of Landau’s attachment to the Dead Sea, where she has made a series of sculptures using objects immersed in its salt-rich waters. In Standing on a Watermelon in the Dead Sea, Landau attempts to remain upright on a melon submerged in the salty water of the Dead Sea, an image that could almost be a scene in the Bible or a stained-glass window. 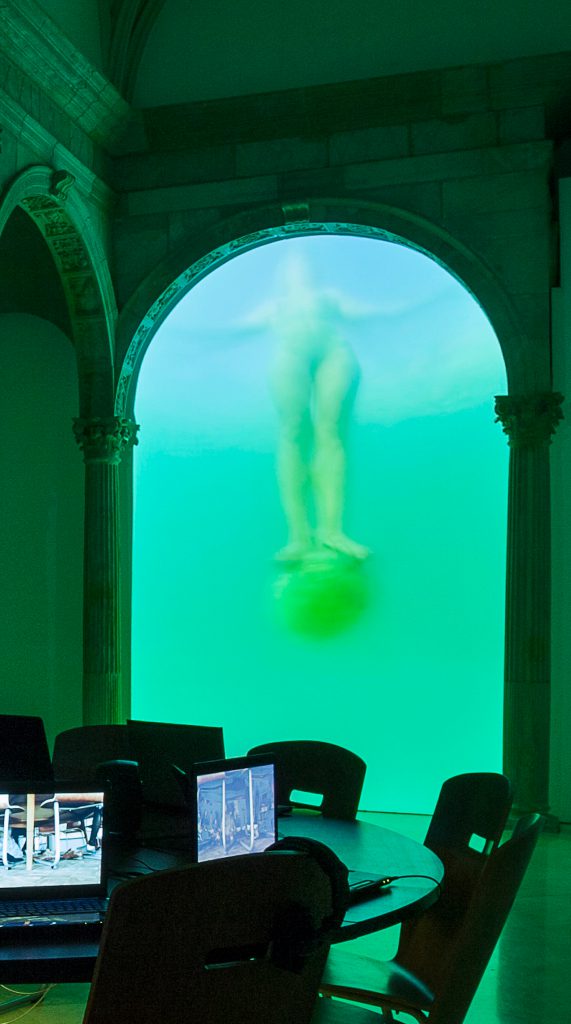 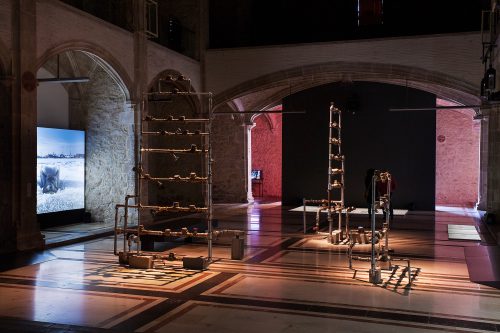 We might also mention Yotam, a closed circuit of pipes that suggest the venous system or digestive tract of the Israeli Pavilion at the 54th Venice Biennale. The work reproduces an image typical of the streets of Tel Aviv, where pavements and façades display exposed pipes, like the guts and veins of dilapidated Bauhaus buildings.

With this exhibition at the MACBA, Sigalit Landau demonstrated that she is indeed “an artist who traverses the edge of feasibility in her studies of the margins of materiality and society, who ceaselessly follows the organic, rotting, unregistered, and unknown, who has gone all the way to the Dead Sea and descended under water – observes postmodern society and the multi-channelled, multicultural city, and from it generates an apocalyptic vision of demise” (Tali Tamir, Collective Digestion and Table Manners).

Multicultural to the core

Sigalit Landau is an Israeli artist born in 1969 in Jerusalem who spent her childhood in Israel, Britain and the United States. She graduated from the Bezalel Academy of Art and Design (Jerusalem) and spent time as an exchange student at Cooper Union school of art and design in New York. She presented her first solo exhibition in 1995 at the Israel Museum and later showed work in galleries in London, New York, Madrid, Paris, Belgrade and Sydney. Her work is held in the permanent collections of the Kunstmuseum Kloster (Magdeburg), the Centro Pompidou (Paris), the Tel Aviv Museum of Art, the Brooklyn Museum (New York) and the MUSAC (León).