NextJohn Cohen and the Q’eros
CULTURE

The poet and writer Renaud Ego is a European authority on the rock art of Southern Africa.

Aided by the ALMAYUDA FOUNDATION, whose directors were fascinated by one of his talks, Renaud Ego published L’Animal voyant (The Seeing Animal) in 2015. This lavishly illustrated book eloquently describes the rock art featuring animals produced by the San, a nomadic people in Southern Africa who, for 4,000 years, have used rocks out in the open as a support for their paintings and engravings of their environment. 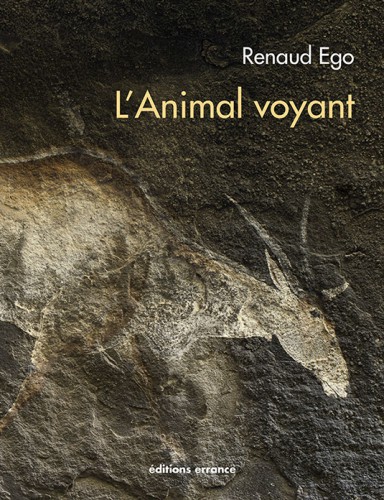 During a presentation of L’Animal voyant at a book signing event organised by La Non-Maison in Aix-en-Provence, Renaud Ego talked about this passion of his.
“In 1997 I discovered rock art paintings and engravings in South Africa and Namibia that nothing had prepared me for. Rising steeply up, like the mountains that so often serve as a majestic frame for them, I experienced them as a jolt out of the blue, something I love, and by stirring the soil of my tongue and my thought, they touched that side of me where I sow the seeds of a new unknown. They revealed a very ancient time to me.”

I had no idea that this intellectual quest would become a dialogue that I would pursue for ever more.

This dazzling encounter with the inventors of an animal art, done with remarkable technical skill, linked in part at least to shaman rituals, transformed his vision of the world and his artistic work.

“I had no idea that this intellectual quest, prompted by a violent passion for an ancient art and which had kept me occupied for two years, would become a dialogue that I would pursue for ever more.”

During the course of this conversation, this “long dialogue”, Renaud Ego came to understand that he had to surrender himself to a new discipline “to receive an ancient thinking so different to our own.” 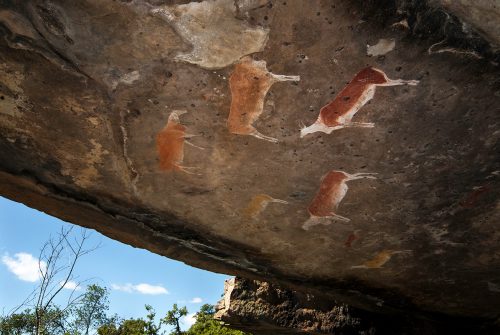 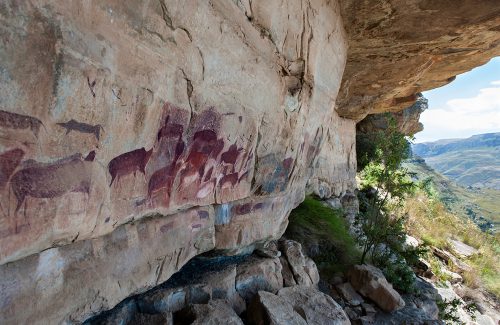 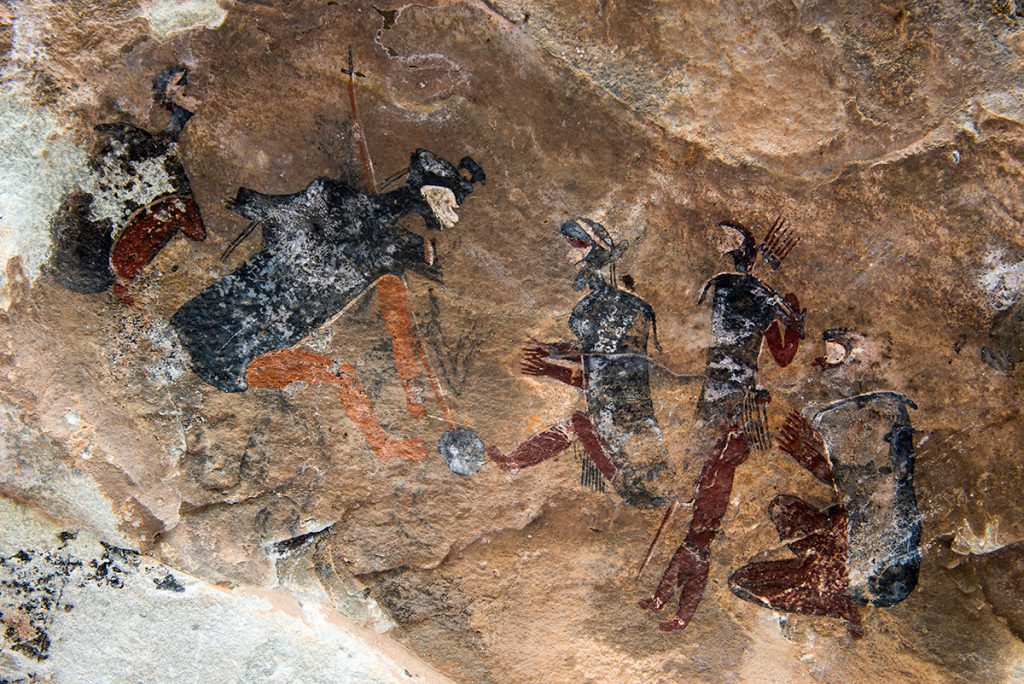 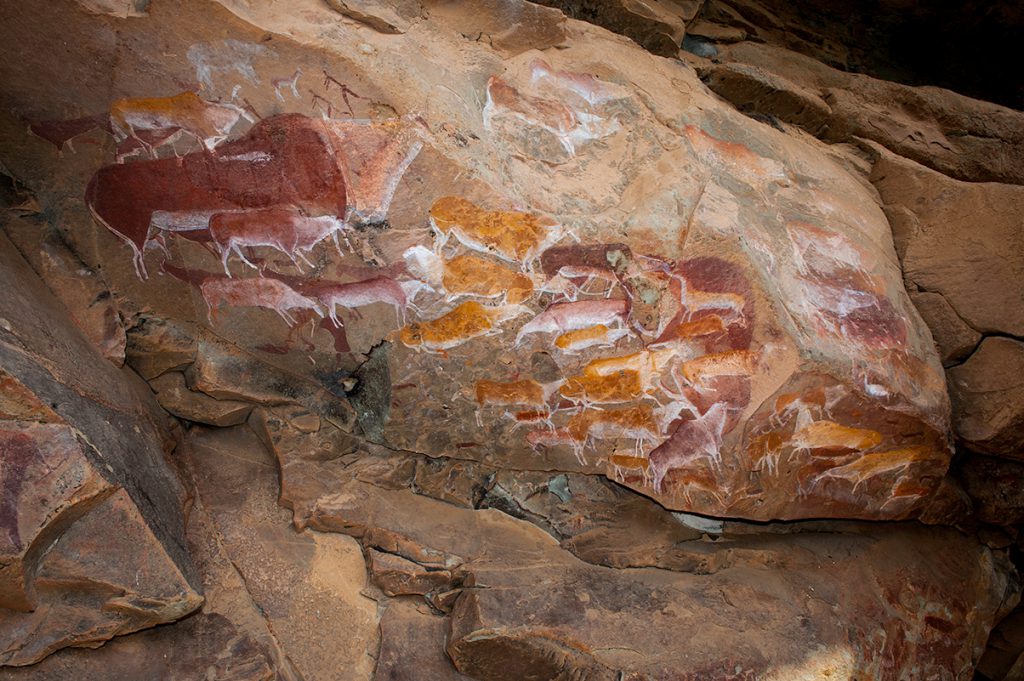 “I had to consent to an effort, one that is at first sight paradoxical for a writer: to develop a willingness to keep silent and to observe silence; and to cultivate a certain openness of my eyes, allowing the veil over them to be lifted by what addressed them in its wordless revelation… Let us agree, then, to an effort that is also another willingness to receive an ancient thinking so different to our own. And let us open ourselves up to a new way of being in the world in which the hastening light, the plural rain, the wind, energies, animal calls, the things that hide and yet are, the buried past that still beats all contributed to the eloquence of a world whose resonance we are no longer capable of grasping.” 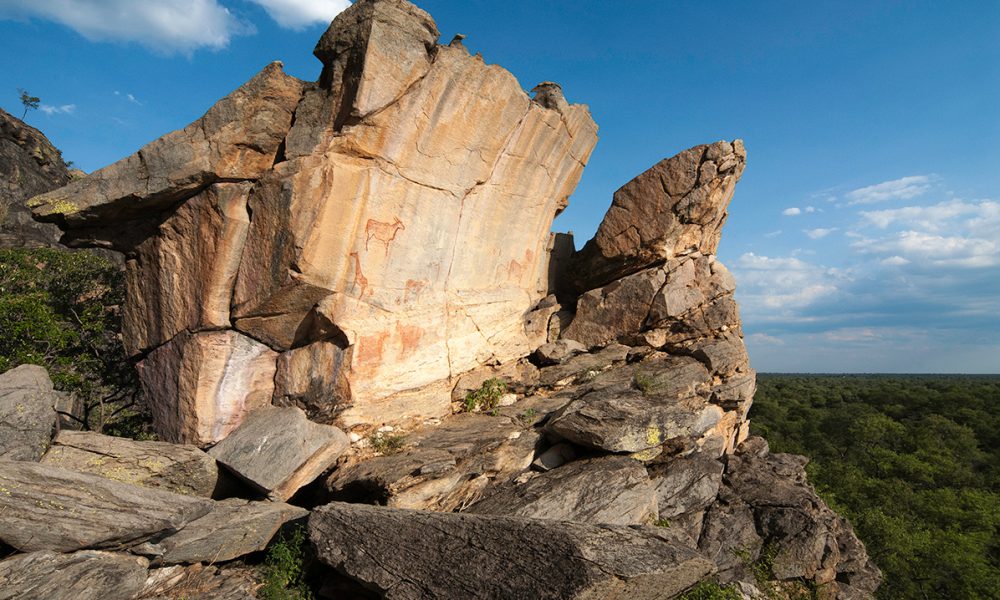 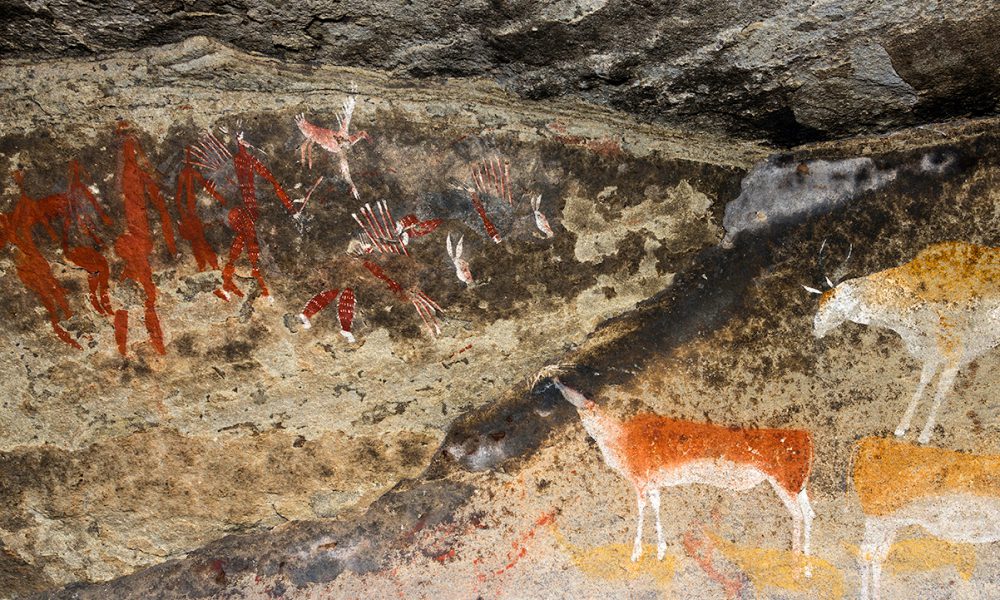 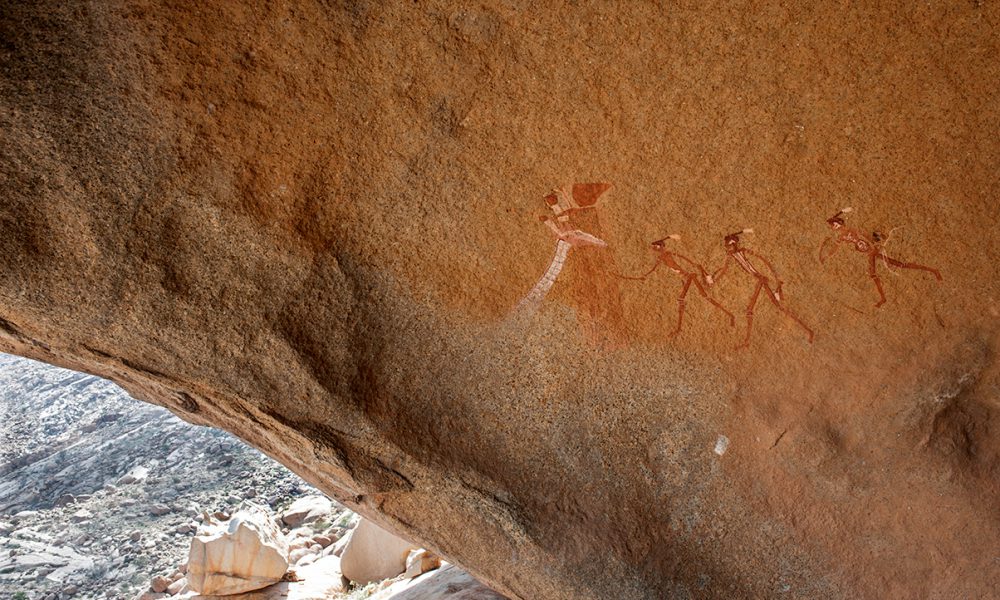 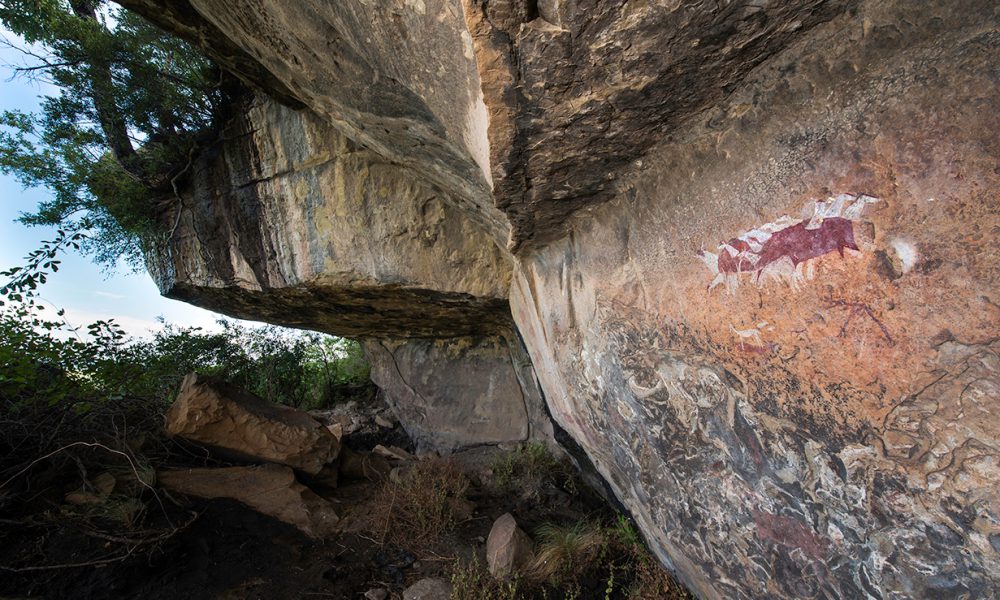 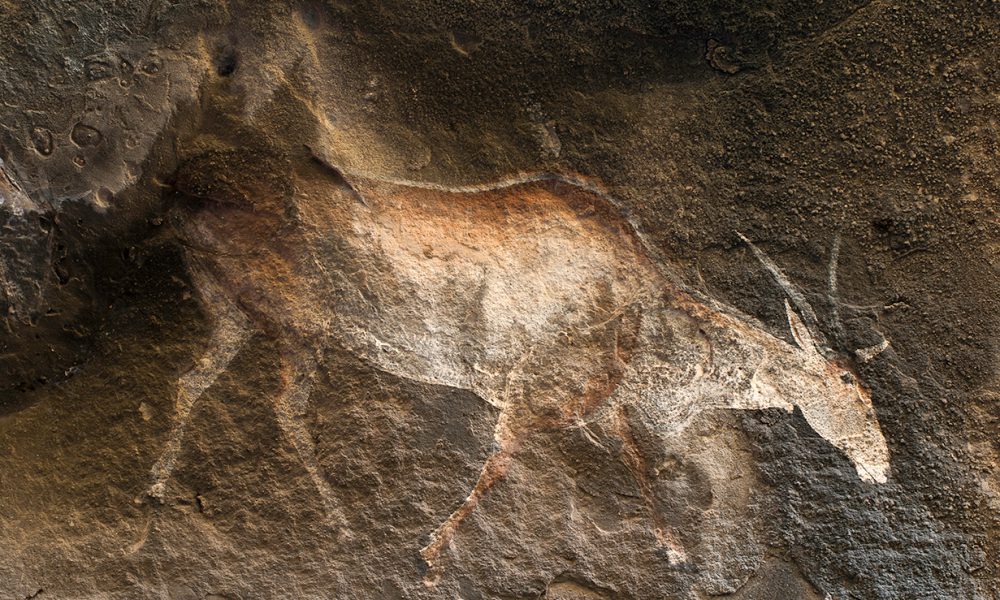 L’Animal voyant, the fruit of this effort, describes in the opening part the way these ancient pictorial manifestations are closely linked to the ritual and cultural practices of the San, these nomads who have, for the last 4,000 years, used rocks out in the open as a support for their paintings and engravings of their environment.
The second part features photographs taken by Renaud Ego that enable us to grasp the tremendous diversity of this rock art. Painted or engraved, the animal figures are often extremely realistic, with mixed colours to depict the fur or coat of an antelope or bovine. On occasions, however, the animal is almost stylised, like these giraffes with markings organised in the forms of a grid. It is also possible to see a strong human presence, often in association with the rest of the representations. Frequently shown in a group, humans hunt, dance or simply walk.

Renaud Ego : Following in the footsteps of the wanderers 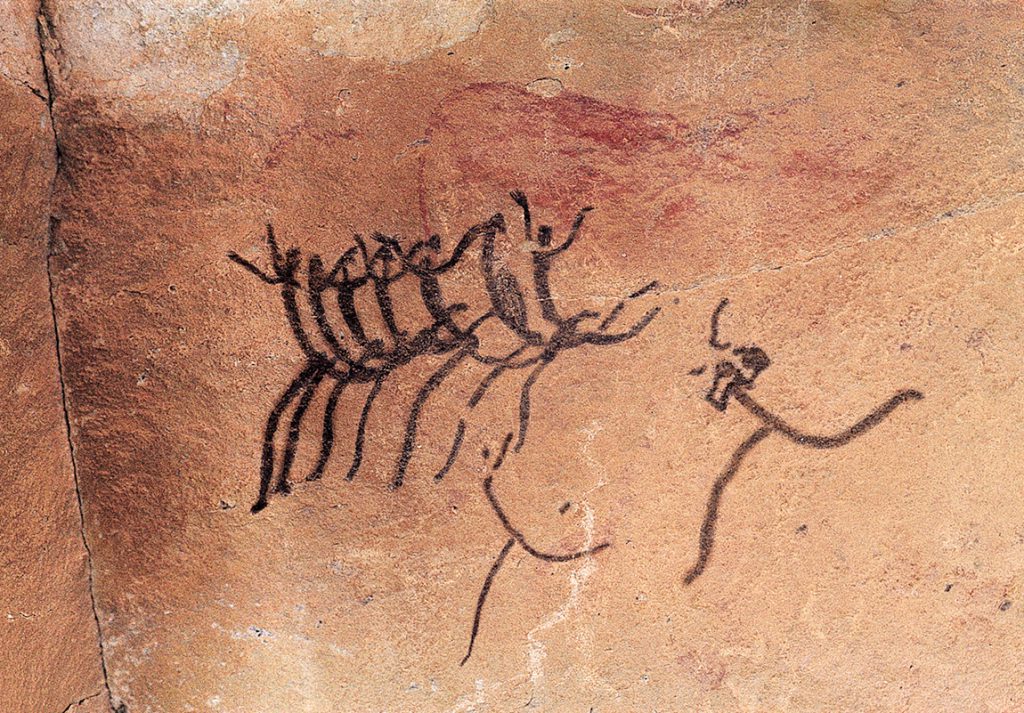 Renaud Ego is one of the few European authorities on the rock art of Southern Africa. He is the author of San, published by Adam Biro in 2000, in which he reveals the Neolithic rock art engravings of the San, the “wanderers”, a nomadic hunter-gatherer people.

The invention of the gaze and the making of images also occupy a central place in the work of the poet and writer Renaud Ego, as in La Réalité n’a rien à voir and Une légende des yeux.